Why the boom in augmented reality toys is here to stay

Parker is an augmented reality-equipped teddy bear that kids can interact with on an iPad or in real life. (Seedling)

From the outside, Parker looks like a soft and huggable teddy bear, just the right size for dragging around the house. But Parker holds secrets in his small frame. When viewing the bear through a smartphone app, kids can treat his ailments, landscape his dreams  and even peer into his guts and bones.

Parker is one of dozens of new augmented reality toys hitting the market and blurring the lines between traditional and digital play. Augmented reality, or AR, typically uses the camera and an app on your phone or tablet to produce moving characters and objects on the screen that interact with what the camera is seeing, and that you can interact with too. The mobile creature-hunting game Pokemon Go pushed AR into the mainstream in the summer of 2016, and has gone on to gross roughly $1.8 billion since.

Now dozens of toy companies are looking to AR to revive slumping sales of old-school board games, action figures and coloring books. In a recent forecast, analytics firm Digi-Capital estimated that mobile augmented reality would become the primary driver of a $105 billion combined virtual reality and augmented reality market by 2022. People may talk more about virtual reality, but AR will make up $90 billion of that market, compared to $15 billion for VR.

Disney has a Star Wars Jedi helmet that comes with a visor that holds a smartphone six inches from a child's face to watch how the phone's camera app transforms a living room floor into a miniature Clone battle. Hasbro's helmet is based on Iron Man. Lego has an app that turns your brick creation into a world populated by walking, talking Lego characters. 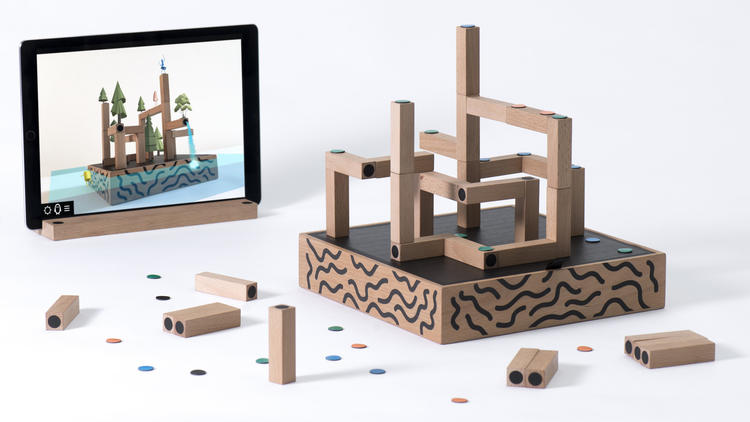 Meredith Bak, a childhood studies researcher at Rutgers University, says augmented reality is booming because it is more accessible and requires less hardware than virtual reality. Its popularity, however, means that we're going to be pushing screens into the hands of ever-younger consumers. According to a 2017 study by Common Sense Media, kids 8 and under now spend an average of nearly 49 minutes a day in front of a smartphone or tablet, up from 5 minutes in 2011.

Seedling, the Los Angeles-based company that makes Parker the AR teddy bear, sells augmented toys for kids as young as 2, which used to be the lowest age that the American Academy of Pediatrics recommended introducing kids to screen time. Those standards are being rolled back, though. The AAP recently revised its screen time guidelines to allow kids under 18 months to participate in screens for video chat.

Scientists are just beginning to understand how play in augmented reality impacts children. In one of the only studies of kids play and augmented reality, Jackie Marsh, a children's digital literacy researcher at Sheffield University in the U.K., filmed children using AR apps and analyzed the data to identify how they promoted play and creativity.

Some of the apps allowed the children to do little more than animate characters in 3D by holding a tablet over a two-dimensional drawing. While children were intrigued by the technology, it didn't do anything to enhance their play. But Marsh also found that other AR apps, like an app that paired with a Furby, promoted more creative play. Her advice: Choose augmented reality apps and toys carefully.

Bak has been surprised how fast augmented reality toys have become a routine part of play. It also helps that most families already have smartphones or tablets, so they don't need to purchase another device. "Five years ago these toys were regarded as novelties, and the longer they've been around the more their effects have become routine and normalized," she says. "The wow factor becomes routinized as kids expect toys to do magical things."

When Parker the teddy bear is sick, kids can help him get better through the accompanying tablet app. They can use a wooden thermometer to take his temperature and the screen shows how high his fever goes. The tablet can overlay Parker with various scenes, which kids can build or manipulate.

"Play itself is not substituted by the technology but it's enhanced by the technology," says Seedling CEO Phoebe Hayman. Having an app that goes along with a toy opens up a new business model for the company, selling a subscription service with new storylines added monthly.

As the industry shakes out, the more successful AR toys will likely be the ones that are less gimmicky about the marriage of technology and reality. Kids will always attach to physical objects, but they also attach to storylines they can play out, says Hayman. The best AR toys will be vehicles that carry out both sides of the equation.